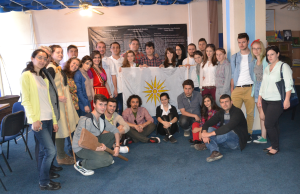 “Vlachs in Europe” project, held in Tulcea, Romania was a great opportunity for the participants to learn about vlachs history and culture, to accept them as a minority, to live among them. As far as I’m concerned, I enjoyed the time spent in Tulcea with the other participants from Albania and Macedonia.

These people are so friendly, funny, intelligent and I’m glad I’ve met them. Thanks to the project, I’ve found out a lot of information about vlachs culture and history, as I sad.

I had the occasion to meet many vlachs people, some of them were  participants of the project, and the rest I’ve met were local people from Tulcea, due to our visits in town. They are very talkative, kind and generous persons.

I’m truly happy that I had the chance to be a part of this beautiful project.

The project called “Vlachs in Europe” was a youth exchange which was held in Tulcea, Romania, from 28th of April until the 6th of May 2014. As the title implies, the project was about the Vlachs, an endangered ethnic minority, and the subjects of the exchange were the culture, language and traditions of Vlachs, and how these can be preserved. It was organised by F.O.R.T.E.S. from Romania. The Association for Progress, Education and Lobbying was the partner organisation from Macedonia, and there were also participants from Albania, from the organisation Beyond Barriers. These countries were chosen on purpose, as all of them have a significant population of Vlachs.

There were eight representatives from Macedonia, and two of us were Vlachs, therefore we had a special interest on the subject. The youth exchange was held in a villa in the city of Tulcea on the Danube delta. We had many activities concerning the cultural and linguistic realities of Vlachs and the countries they live in. We also had one day per each country to present the situation of Vlachs in our countries individually (which finished with an intercultural presentation of each country in the evening).

Apart from the activities in the villa, we also had a planned visit to the Vlach community in Tulcea, the ethnological museum (where among other things the life of the Vlachs in the area was represented), and we also visited Vlachs who live in a nearby village and learned about their lives, customs and traditions – and even made friends with them! At the end of the youth exchange, we had a final performance divided in three groups: a song group, where participants sang Vlach songs, a dance group with traditional dances, and a drama group about Vlach traditions, which used improvised theatre plays to demonstrate Vlach traditions such as wedding and new year.

It was a great project where we learned a lot of things we didn’t know about the Vlachs as a people, and discussed about many ways how to improve their position and preserve them as a minority. We also made a lot of friends with the participants from Romania and Albania – but also with the local population – and we are sure we will meet these friends again somewhere!

This project held in Tulcea, Romania, where the main objective were Vlachs in Europe, showed positive results, given that participants were leaders from Romania, Albania and Macedonia, and all of them had one common motto – to learn about Vlachs, their customs, culture, language and their lifestyle.

Although we were from different countries, but the friendship and the interest to learn and learn something new, wasn’t obstacle for us to met each other, socialize, and also to explore, to ask questions, to give answers using the plays, presentations, through songs, to achieve that which associated us in this project. This project and organizers themselves had a good plan and a good organization for the participants as well as how to push themselves to explore.

Everyday activities through Key competences were a guide and how to get to the issues which were topics of interest for the project, as well as familiarizing themselves with Vlachs customs which were presented by representatives in Tulcea, trying on the best way to show their origin. All days until the end of the project we had daily agenda consisted of games, workshops, energizer, and the best of all was the presentation of Vlachs customs through role plays, whose themes were related to the Vlach traditional wedding where the biggest impression left among participants was to find out more about Vlach flag named Hlambura, then customs for Easter, and for the pie named Placinta, and in the end to finish with traditional Vlach music accompanied by dances and songs.

The best key to introduce about Vlachs were workshops, where division into groups and our role inside was helpful for us to be more responsible to finish our duties where all of us had the opportunity to express their opinion, than we exchanged what we had learn, and on that way to helped us to find out more about Vlachs. It was our honor and pleasure to introduce and talk with several Vlach representatives, including the President of Vlach Organization, who live and work in Tulcea, they told us more about Vlachs history where their main objective is to fight to be recognized as a minority and to have some rights and benefits which are supposed to posses as Vlachs, that is not case in Macedonia, because here Vlachs are recognized as a minority where they have big advantages in education and work.

In order to express what we had learn, we had that opportunity to give our suggestions which is the best way to present the Vlachs people, which will be the most appropriate way to learn Vlach language, culture and tradition. On this way we made a difference about Vlachs in Romania, Albania and Macedonia and their way on life. This project was a great challenge and a great experience, because in this way we had that opportunity to express our opinion, ideas, to know more about ourselves, about other people, about meeting with them, and not only about Vlachs, but in all areas in all over the world.

“Vlachs in Europe” was a multicultural youth exchange, which was held in the country of Tulcea, Romania. The project took place from 28th April until 7th of May, with a partnership consisting in three countries with Vlachs roots: Romania, Macedonia and Albania. As you can understand, the thematic of this project was about Vlach community, a minority with a culture endangered. The main goals were to learn more about Vlachs costumes and traditions, to exchange information regarding the evolution in time and space of this community, to preserve and promote the Vlachs cultural heritage along with the other European cultures.

In order to accomplish all of them we followed a daily agenda rich with different activities such as workshops, seminars, free-discussions, brain storming, intercultural nights, games, energizers, role plays ect. Apart of this activities we visited the Vlach community in the Tulcea branch, the ethnological museum and we also visited Vlachs who live in a nearby village, in the area of Dobrogea and learned more about their lives. We also had the honor to introduce and talk with several Vlach representatives, including the President of Vlach Organization, who live and work in Tulcea.
Everybody was so friendly with us and that made this project more successful. We not only reached the goals of the project but we also had an amazing experience, that for everybody is hard to forget. I had the opportunity to cooperate with people from different backgrounds and I am glad I have met them! I am really happy to have been part of this project!

During the project I’ve developed a lot of important information, the exact ones that I expected to accumulate before the project. An important step in this development was the way the activities were organized but also the friendly compact group that was created.

This site uses Akismet to reduce spam. Learn how your comment data is processed.